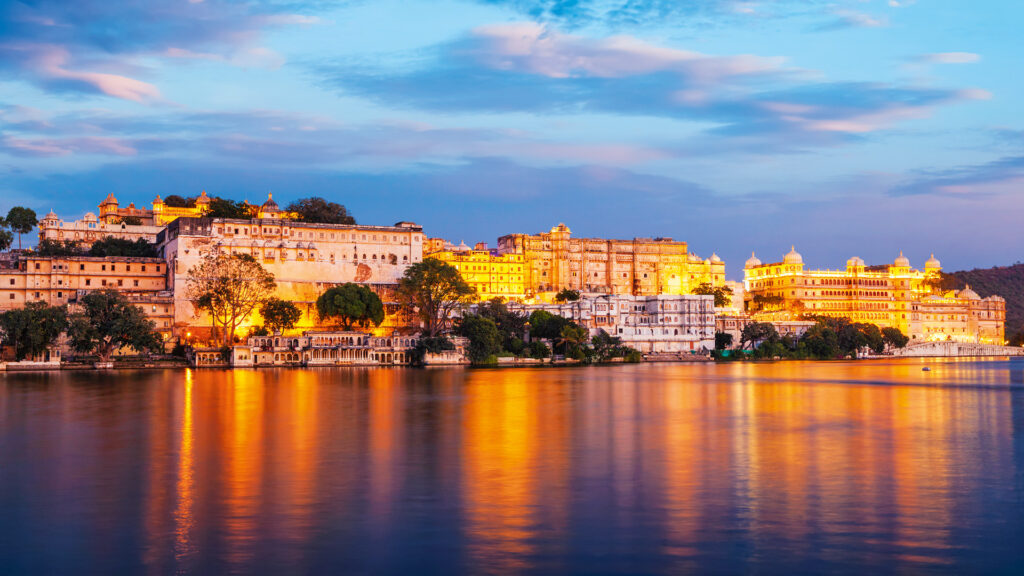 Discover The Culture And Heritage Of Charming Udaipur

Thereʼs an undeniable charm winding its way through Udaipur. Take a stroll through this historical city, known as the ʻVenice of the Eastʼ,
to experience the vibe that makes it so magical.

Gliding in a canopied boat, along the tranquil Lake Pichola, awash with a golden glow under the rays of the setting sun, I gaze at the majestic City Palace, the forts rising in the distance, and the ghats lined by exquisite havelis. And I feel as if I’m part of an intricate Rajasthani miniature painting. I love cities on water. And Udaipur, with its beguiling landscape and rich history, wins my heart instantly. “Udaipur’s rulers understood the importance of water in an arid terrain, so they created artificial reservoirs. All the lakes here are interconnected,” explains our local guide Ram Bhai.

Located at the base of the Aravalli Mountain Range, Udaipur is India’s ‘City of Lakes’. Founded by Maharana Udai Singh in 1553, it was the capital of the erstwhile Mewar Kingdom. There’s no better place to uncover all this history than at the magnificent City Palace. Set at the top of a hill, this grand structure is built in a medley of architectural styles, with an abundance of jharoka windows, towers, and cupolas. The triple-arched Tripolia Pol, its northern entry gate, is especially remarkable. As per legend, it is here that the maharajas were weighed in gold and silver, which was then distributed among the locals.

The entire complex is essentially a conglomeration of palaces built over 400 years, by 22 maharajas down the ages. As I walk through rambling courtyards, flamboyant durbars, and terraced gardens,
I imagine Rajasthani queens and their entourage in filmy veils and tinkling anklets passing through the same path, their laughter filling the air. The opulent interiors create a mesmerising visual feast of their own, with intricate mirror and marble work, alongside exquisite inlays and paintings. The mirrored walls and stained-glass windows of the Moti Mahal, the private residence of Maharana Karan Singh, reflect sunlight like kaleidoscopic prisms. I am entranced by the artistry of
the Kaanch Ki Burj—every inch of this chamber is covered in a mosaic of red and silver glass and mirrors. There’s an intense interplay of colours as light dances off the domed structure.

The world outside seems strikingly different as I leave the palace and make my way through the chaotic, serpentine lanes of the Old City.
As monkeys clamber on electric wires and mopeds whizz past me,
I walk down a labyrinthine lane with graffiti on walls, and walk up a narrow staircase to the Sun N Moon Restaurant, a terrace eatery with panoramic views of Lake Pichola and Gangaur Ghat. As I enjoy my coffee and falafel, I find pleasure in watching people and life pass by.

Next, I head to Saheliyon Ki Bari, the creation of King Sangram Singh II. My favourite place in town, this landscaped garden with lush lawns, lotus pools, pavilions, and fountains with sculpted birds, reminds me of a set from old, romantic Bollywood films. Set along the picturesque Fateh Sagar Lake, the gardens are a pleasure to walk through. Interestingly, the rain fountains were imported from Great Britain to adorn this ‘pleasure garden’ for the princess and her companions.

My tryst with history over, I stroll over to the Hathi Pol Market, near the City Palace, offering colourful bandhani and leheriya sarees, dupattas stacked like rainbows, lac bangles, embroidered juttis (type of shoes), and handcrafted bags. It’s a sensory experience as I browse through reams of glitzy material, bargain hard, and slowly fill my bags with small treasures.

With one guilty pleasure satiated, it’s time to focus on the next—food! A Rajasthani thali at the Traditional Khana Restaurant in Panchwati is
a meal fit for a queen! Uniformed waiters pile food onto my leaf plate, from soft rotis and different kinds of chutneys, to kadhi (a gram-flour curry), daal baati churma (a dough ball served with lentils), and gatte
ki sabzi (gram flour dumplings). The famous Rajasthani hospitality is
in full force here as the waiters keep persuading me to try everything! For a more luxe experience, I recommend 1559 AD, a bistro lounge restaurant housed in a 100-year-old bungalow painted blue and named after the year the city was founded.

Much later, when the effects of my amazing feast had worn off, my guide and I set off for a drive up a steep road through a wildlife sanctuary to the 19th-century Sajjan Garh Palace, or ‘Monsoon Palace’. Nestled on Bansdara Peak, it featured as the villain’s lair in the James Bond movie, Octopussy! Given its striking location, the palace offers
a bird’s eye view of the city as it shimmers with its flamboyant palaces and forts, mirror-like lakes, rugged Aravalli mountains, and surrounding greenery. It’s this unforgettable view from the top that remains embedded in my memory long after my visit.

GETTING THERE
Vistara offers twice-daily direct flights to Udaipur from Delhi and Mumbai.

Related: A Local’s Guide To The Enchanting City Of Jodhpur