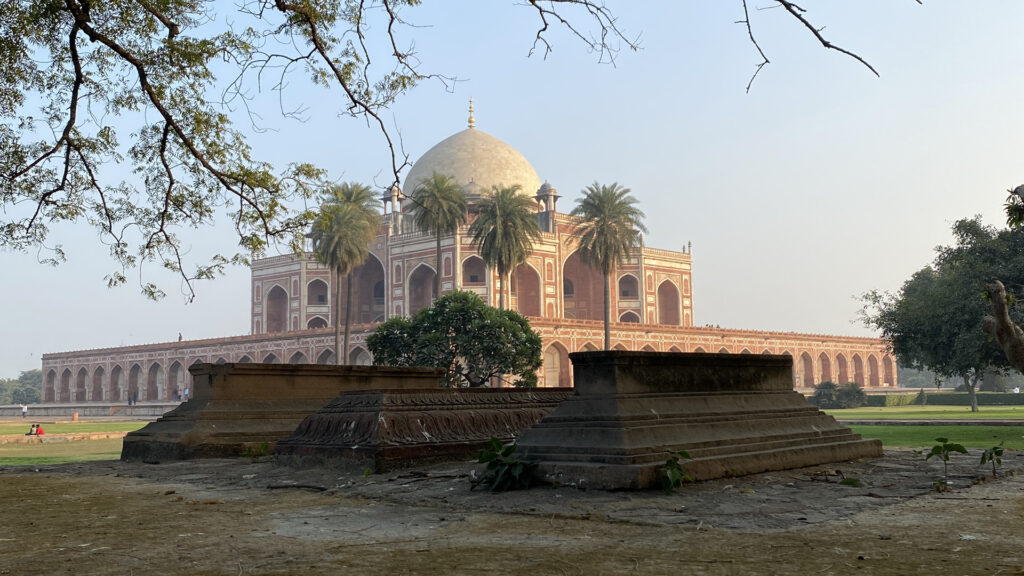 Discover The Charm Of Delhi Through Its Best Walking Trails

A professional historian and heritage walker takes us on some of Delhi’s best walking trails this winter.

Delhi is famously known as the phoenix city, which rebuilds itself each time it is destroyed. Along with being a traveller’s favourite hub when it comes to food and shopping, the metropolitan necropolis, with a history of over a thousand years, has ruins scattered all over the city, which are a delight to explore on foot. Here are some heritage walking trails that you must not miss in Delhi this season.

I am sure you must have seen dreamy pictures of the Taj Mahal on winter mornings as it peeks out of the fog. A similar sight can be experienced in Delhi at Humayun’s Tomb, and that too sans the crowd. Humayun’s Tomb, which predates the Taj Mahal by almost a hundred years, was actually the inspiration behind it. Much like the Taj, this is also a symbol of love, built by a wife for her late husband. Sunrises at Humayun’s Tomb are a surreal experience. One can see the magic of symmetry in this grand mausoleum of the Mughals as the pristine white dome glistens under the first rays of the sun.

The complex of Humayun’s Tomb houses a myriad monuments like the Barber’s Tomb, said to be the mausoleum of Emperor Humayun’s favourite barber, and a blue domed monument known as Nila Gumbad, with intricate Persian tile work adorning the structure, reminiscent of the architectural motifs during the Mughal rule. As you walk back, do follow the periphery of the walls, until you reach a small doorway which overlooks the sanctuary of Delhi’s most revered saint, Hazrat Nizamuddin Auliya, where he used to live and pray. A few steps ahead is a beautiful Mughal jharokha, which overlooks the serene Gurdwara Damdama Sahib. Outside the main mausoleum complex lie a few other structures like a serai (guesthouse) built by an Arab merchant; its gateway has an exquisite display of intricate ceiling art, and a few mosques and mausoleums which are not to be missed, especially the mausoleum of Isa Khan.

One of the most famous travelogues of Delhi labels it as the City of Djinns. It is a widely prevalent belief that a ruined fort near the walls of Old Delhi is now home to numerous djinns (supernatural spirits) and fairies and the experience is like no other. Try visiting a couple of hours before sunset so you have time to explore the ruins of this 14th century fort whose layout inspired the Red Fort of the Mughals. Built by one of the most prosperous Sultans of the Delhi Sultanate, along the banks of the river Yamuna, Feroz Shah Kotla was once home to some of the most beautiful palaces in Delhi. The complex boasts a rich history of being a blessed fort during the era of the Sultanate and a revered home to Sufis during the Mughal rule to being used as a jail during the British period. While exploring the ruins, you will come across cellars used as prisons by the British. Moving ahead there are dungeons with numerous vaults and crypts said to be inhabited by djinns. Locals frequent this area to pray to these djinns for the fulfilment of their wishes and for cures for their ailments. You will find earthen lamps, incense sticks, flowers and sweetmeats around as offerings. A sweet scent of sandal, rose and jasmine perfume emanates from the dungeons as you may spot people writing letters to the djinns, to let them know of their wishes. The dungeons lead you to a medieval-era mosque and the ruins of a palace, crowning which stands an Ashokan pillar. Do climb up to catch a beautiful view of Delhi’s winter sunset with a backdrop of the glistening new capital city on one side and the ruins of its equally glorious past on the other.

Before exiting the complex, do stop by at the stepwell, one of Delhi’s largest called ‘Pariyon ki Baoli’. Believed to be an abode of fairies, you will find bangles and letters tied here addressed to fairies to bless newborns. On your way out, you might spot people distributing biryani and sweet pulao, a tradition practised here upon the fulfilment of one’s wishes. You will find the devotees of the resident djinns of Feroz Shah Kotla extremely warm and welcoming and ready to narrate tales about the mystic mysteries encountered by them, alongside some of the best homemade biryani that you might ever come across. 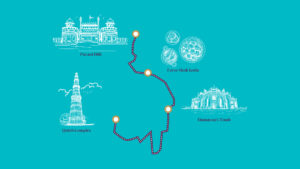 Shahiahanabad, better known as Old Delhi or Purani Dilli in popular language, has been one of the most intriguing destinations of the capital city. A generous mix of heritage, culture, shopping and food, Old Delhi never ceases to surprise you.There is no specific time to explore the lanes of Old Delhi. Visit early morning if you like to soak in the heritage in a leisurely manner, without having to combat the hustle, or visit in the evening if you’d like to shop for some quirky trinkets. That said, street food options can be found at any time of the day. There are the halwai-style breakfast options of bedmi puri, nagori halwa and jalebis and various types of chaat throughout the day. And while there’s a lot to see and do in its many nooks and crannies, the trail that I mostly use to explore the Old City is through the markets of Chandni Chowk right upto the Jama Masjid. I’d suggest you take the metro and exit from the Lal Qila Metro Station to avoid the hassle of traffic and finding parking spaces. Chandni Chowk is a wonder to explore. Built by Shah Jahan’s eldest daughter, Princess Jahanara, this lane was once the poshest with exquisite goods from around the world on display. Today, besides being a shopper’s paradise, it also boasts a rich and diverse heritage with a temple, a church, a mosque and a gurdwara, all within a kilometre’s stretch.

Take a turn at Kinari Bazaar and stop here for Old Delhi’s most famous jalebis and the best Daulat ki Chaat. Inside, one can find myriad shops selling the most exquisite antique jewellery pieces with small labyrinth-like lanes hidden amidst them, opening up to the ruins of grand rustic havelis and mosques.

Cruise through these narrow galis as they lead you to the heart of this once grand Mughal city, the Jama Masjid, which is sure to leave you awestruck with its opulence and architectural symmetry. Spend some time exploring the mosque and do climb its minar to get a bird’s eye view of the Old City. End the walk with a scrumptious feast of kebabs and curries from Matia Mahal. I’d suggest Jawahar Hotel if you want a dine-in experience but there are many other street-side kebabis whose fare you can try. Don’t miss out on the awesome Shahi Tukda from Cool Point for the perfect end to your escapade.

Walking into the lit up Qutub Complex at night feels no less than walking into the set of a larger than life period movie. The grand structures of this 800-year-old complex bring back to life the splendour of the era of the Sultanate. While the towering Qutub Minar steals the show, the surrounding structures are no less resplendent. Be it the double-domed Alai Minar, featuring the first arch ever built in Delhi, or the grand tomb of Sultan Iltutmish, with exquisite carvings on sandstone, all of these structures seem to be telling a story. The complex also houses the mausoleum of Alauddin Khilji and his ambitious Alai Minar, which was supposed to be taller than the Qutub Minar; unfortunately, both the masoleum and Alai Minar are in ruins. The Qutub Minar is surrounded by the Quwwat-ul-Islam mosque where Razia Sultan once took over the dynasty so carefully nurtured by her father from her incompetent brothers. Once done exploring the complex, do take a few moments to just sit down on one of the benches near the minar and just watch the planes go by. As you exit, you must plan a dinner at one of Delhi’s most sought after dine-in experiences, located nearby, with the most amazing views of the Qutub that are sure to mesmerise you.