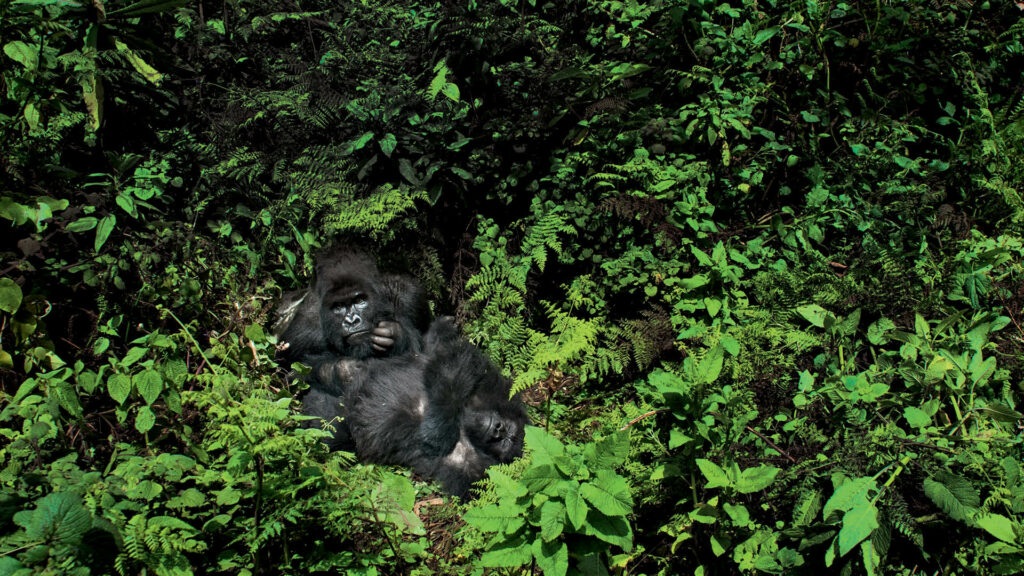 Safari is such an evocative word that its mere mention paints a million pictures in our minds, from Meryl Streep flying over the African plains in Out of Africa, to the wildebeest stampede in The Lion King. However, safaris are not limited to just the big cats or to a single continent. Essentially, a safari is an expedition to observe any of our planet’s wonderfully unique creatures in their natural habitats. And just like that, a range of exciting opportunities unfolds before us. Join us on a journey of discovery as we present some of the more unusual safaris on offer in this wonderful world.

Trekking in a forested volcanic mountain is akin to hunting King Kong, and while you won’t come face-to-face with a 50-foot giant, you will experience one of the most extraordinary interactions of your life. As you journey up the Virunga Mountains in Rwanda, at a height of 8,000 to 13,000 feet, the trek will take you to the verge of the mountain’s mist lines where these majestic creatures appear and disappear like phantoms under its cover. With the gorillas making their way further up the mountains, the treks have become more challenging over the years. However, a scout is always sent ahead and instead of several hours of trekking, you may sight one within a 30-minute hike. Once a family unit is in view, most visits are kept to an hour, during which you can observe their daily habits. For these creatures to allow you to get so close without any barriers is truly an awe-inspiring honour.
Tip: Staying at a resort in the mountains adds to the experience; most will arrange a tour for you.

POLAR BEARS IN THE ARCTIC

There’s something magical about entering the domain of the mythical Snow Queen. And though these glimmering white landscapes may look baren, appearances can be deceptive. Look deeper and you’ll discover this frozen land is teeming with wildlife. These include the colourful Atlantic puffins, Arctic wolves, seals, and walruses. However, the greatest prize to see here is the king of the Arctic—the polar bear. Remember, that although they may appear cuddly and approachable, these giant creatures are ferocious predators. The best way to experience a safari in this extreme location is by heading out on a guided cruise that will not only ensure successful sightings of this powerful creature, but also off er viewings of a huge variety of whales—beluga, humpback, narwhal, and bowhead whales—in the waters of this unique ecosystem.
Tip: The months between August and October are ideal for a cruise.

UNDERWATER SAFARIS IN THE MALDIVES

A safari in its truest sense. While sceptics may claim that this is just diving or snorkelling, remember the definition of a safari earlier! Considering that water makes up 71 per cent of the Earth’s surface, one can only imagine the full extent of what lies beneath the waves. Arguably, one of the most picturesque places in the world to experience an underwater safari is the Maldives. Its natural, protected ecosystem is a sanctuary to all manner of sea life, offering a unique opportunity to watch and, in some cases, interact with some of the most magnificent creatures of the deep, including the elusive sea turtles and whale sharks. For a truly surreal experience, try swimming alongside manta rays— you’ll feel like you’re flying as they glide past.
Tip: Most luxury properties in the Maldives offer experiences to interact with wildlife below and above the water. Try swimming at night to experience the magnificent bioluminescence.

Africa is the home of the safari, and no list can be complete without its inclusion. And while driving through the jungles in a jeep is one of the more traditional ways of experiencing a safari, we recommend a unique aerial tour. The months between July and October unveil the greatest show on Earth—the Great Wildebeest Migration on the Serengeti in Tanzania. Watch spellbound as more than two million wildebeest, along with gazelles, zebras and other antelope species, make a clockwise journey around the Serengeti in search of green pastures. Unquestionably, one of the most spectacular ways to experience this natural phenomenon is from above in a hot-air balloon. Gracefully gliding through the skies as the majestic odyssey unfolds on the plains has a certain romanticism to it. A memory for the ages, certainly.
Tip: Most hotels make arrangements for expeditions and safaris and it’s often best to book through them.

It’s hard to believe, but every year, between the months of February and May, thousands of migratory flamingos converge at an overcrowded, sprawling metropolis known for its bustling, industrious vibe. The venue? Thane Creek Mudflats in Mumbai, India. Spread across nearly 17 square kilometres, between the districts of Vashi and Airoli, the Flamingo Sanctuary is a veritable oasis of calm for these elegant, long-legged creatures as they choose to make this their temporary home for a few months, claiming a birthright to the place that goes back a long time before the area was ever populated. Look on as the skyline acquires a blushing hue with several hundred pink heads, graceful necks, and feathered bodies bobbing up and down as they precariously yet expertly balance on one leg—it’s a truly memorable experience.
Tip: Hire a tour guide trained by the Bombay Natural History Society (BNHS) on the hour-long boat safari that sets off from the Coastal and Marine Biodiversity Centre at Diva Nagar Road, Airoli, Navi Mumbai.

Quebec is also known as la belle province (the beautiful province), largely due to its beautifully preserved, bio-diverse locale. Home to more than 24 national parks, the state possesses some of the most dramatic and ancient landscapes in the world. Its 5,000-year-old forests, spread over 3.5 million square kilometres, are inhabited by wolves, bears, bison, elks, fox, and 650 other native species, making it a spectacular safari destination. In fact, there are options for all age groups and abilities to get one with nature. Be sure to try and see a creature that is irrevocably tied to Canada—the moose is neither a deer nor a reindeer, but rather a hybrid. It is the largest antlered animal on the planet, yet there is something quite beguiling and endearing about this creature. Despite weighing more than 600 kgs, they are surprisingly agile in their enormity and can glide silently through the woodlands making them hard to spot. No wonder it’s considered quite the treat to see one here.
Tip: Go on a night trail to discover a magical flip side to the woodlands.

The Scottish Highlands throw a beautiful curve into what we traditionally consider a safari. The heather-drenched scenery changes its colours as per the season, going from stunning purples to rich oranges, creating a breathtaking backdrop to the wildlife here. The highlands are ruled by the mighty red deer or as it’s known in Scotland—the Monarch of the Glen (titled after a dramatic painting by Sir Edwin Landseer). It often holds court in the morning mist with its unique cry. Whilst they are not the largest species of deer, they have
a natural affinity to Scotland and are supported by a cast of loyal Scottish subjects that can also be sighted here, including the majestic golden eagle who rules the skies and the humbler but gorgeously coloured pheasants and grouse indigenous to the area. From the grouse family, the Strutting Capercaillie takes centre stage with a name to impress. These two-and-a-half-feet birds have famously
been ready to spar with anyone who approaches them, including the naturalist Sir Richard Attenborough.
Tip: The best time to visit is June when the wildlife is in visible abundance. However, there is something special about autumn, too, and whilst you may see fewer birds, the magical environs will surely compensate.